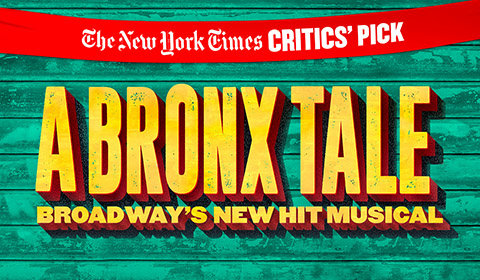 Longacre Theatre
3 seat views
Robert De Niro makes his Broadway directing debut with A Bronx Tale. Based on the one-man show and following a hugely successful movie adaptation, this story of fathers and sons set against a backdrop of the Mafia’s organized crime syndicate plays at the Longacre Theatre.

Calogero is a working-class boy growing up in New York’s Bronx neighborhood. His bus driver father is keen for him to learn the family values of hard work, respect and integrity, but Calogero’s head is turned by enigmatic mob boss Sonny. Caught between the father he adores and the father-figure who could grant him power, this coming-of-age tale is an emotional and soaring fable about family and loyalty.

A Bronx Tale on Broadway features a book by Chazz Palminteri, whose one-man show of the same name inspired the 1993 movie.

With music by Alan Menken (The Little Mermaid, Little Shop of Horrors) and lyrics by Glenn Slater (Sister Act, School of Rock), the show is co-directed by Academy Award winner Robert De Niro (The Godfather, Taxi Driver) and Jerry Zaks. A producer, director and actor in countless iconic movies, De Niro made his movie directorial debut in 1993 with A Bronx Tale. Tony Award winner Zaks previously directed Palminteri’s script before its development as a musical.

With songs including “Look to Your Heart” and “The Choices We Make”, A Bronx Tale at the Longacre Theatre is a stunning new musical that celebrates the bonds of family.

Special notice: Fans of Robert De Niro’s movie of the same name will be enthralled by Alan Menken and Glenn Slater’s musical arrangement, whilst any fans of emotional family dramas will find familiar resonances in A Bronx Tale.

A Bronx Tale seat view photos show what view you will get for your money. Unfortunately we do not have any seat views for this show.