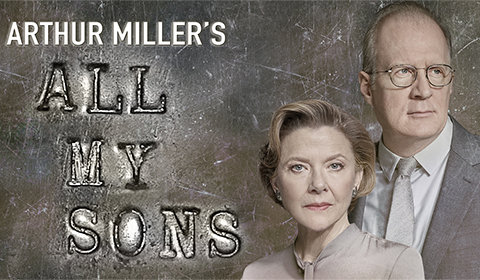 All My Sons tickets

Set in 1947, All My Sons follows Joe and Kate Keller who, along with their two sons, seem to epitomize the American Dream - but their success is shadowed by the grief of losing their eldest son in the war. When a figure from the past reappears, the Kellers are forced to confront the devastating effects of greed, ambition and regret.

Tracy Letts and Annette Bening star as Joe and Kate Keller. Letts’ career includes both a Tony Award for acting and a Pulitzer Prize for his play August: Osage County. He has previously appeared on Broadway in Who’s Afraid of Virginia Woolf in 2013. Bening is a star of stage and screen, with multiple Tony and Academy Award nominations to her name. She has appeared on stage in King Lear and The Cherry Orchard, and on-screen in American Beauty and most recently, Captain Marvel.

All My Sons is directed by Jack O’Brien, a member of the Theatre Hall of Fame whose previous work includes Hairspray and Charlie and the Chocolate Factory. The creative team also includes 22-time Tony Award nominee and costume designer Jane Greenwood (The Little Foxes) and set designer Douglas W. Schmidt (Into the Woods).

Featuring an unmissable central cast who illuminate Miller’s iconic tragedy, All My Sons at the American Airlines Theatre is one of the season’s must-see shows on Broadway.

Special notice: Fans of Arthur Miller and 20th century American drama should secure tickets to All My Sons, which shows the playwright at his devastating best. With a cast headed by Annette Bening, this production is also perfect for theatergoers wanting to catch one of the USA’s finest actresses on stage.

All My Sons seat view photos show what view you will get for your money. Unfortunately we do not have any seat views for this show.