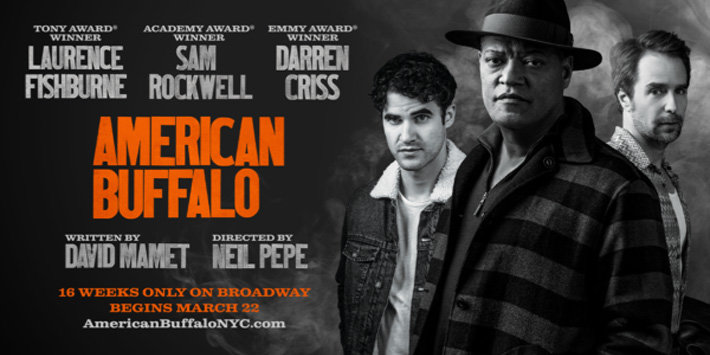 A starry revival of Mamet’s classic

Set in a junk shop in an unnamed town, American Buffalo is an explosive and smart story about shop owner Donny and his assistant Bobby. When Donny sells a buffalo nickel to a customer, he begins to suspect it was worth more than he received. The pair plot to steal the coin back with the help of poker buddy Teach. Soon the three men are caught up in a game of suspicion and double-crossing as they compete for the biggest cut.

Pulitzer Prize-winner David Mamet’s plays are famed for their incisive, bold and confrontational style. His other works include Speed-the-Plow and Oleanna.

The American Buffalo Broadway cast is led by Laurence Fishburne as Donny, Sam Rockwell as Teach and Darren Criss as Bobby. They are directed in the Tony Award-nominated revival by Neil Pepe.

Catch three award-winning actors on stage in a smart and snappy revival with American Buffalo tickets. The show is currently running at the Circle in the Square until July 10.

Running time: 100 minutes (without an intermission)

American Buffalo seat view photos show what view you will get for your money. Our users will start adding seat views when the show opens.

Earn double Rewards points by adding your American Buffalo seat view photo! Use your points for Theatre Tokens and Encore Tickets vouchers and get money off your next theatre trip.