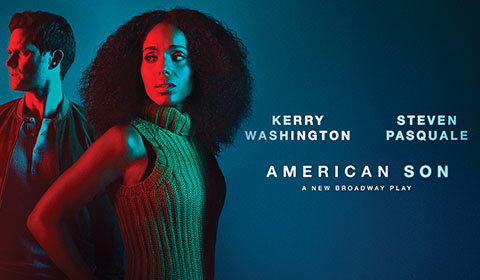 In a Florida police station in the middle of the night, psychology professor Kendra is searching for her teenage son. She knows he’s been caught up in a driving incident, but officers won’t tell her any more. As a storm rages outside and Kendra’s estranged husband Scott arrives on the scene, American Son exposes the USA’s divisions and prejudices in a tight-knit family drama.

Steven Pasquale performs opposite her as husband and FBI agent Scott. His theater credits include A Man of No Importance and The Bridges of Madison County, for which he received Drama Desk Award nominations.

The cast is rounded out by Eugene Lee (Gem of the Ocean) as Lieutenant John Stokes and Jeremy Jordan (Newsies) as Officer Paul Larkin.

American Son is written by Christopher Demos-Brown, in his Broadway debut. Director Kenny Leon is a Tony Award winner for his “inspired” (The Wrap) revival of A Raisin in the Sun starring Denzel Washington; he has also worked extensively in regional theaters including the Oregan Shakespeare Festival and Chicago’s Goodman Theatre. Other creatives include scenic designer Derek McLane (Children of a Lesser God) and lighting designer Peter Kaczorowski (Sweat).

Acting as a microcosm of wider society, American Son on Broadway packs the personal and political together into a compelling 90 minutes. It begins previews at the Booth Theatre on October 6 2018, with opening night set for November 4.

Special notice: Fans of Kerry Washington’s performance in Scandal should snap up tickets to her second Broadway engagement. American Son is also perfect for anyone who enjoys new writing that engages with contemporary issues.

American Son seat view photos show what view you will get for your money. Unfortunately we do not have any seat views for this show.