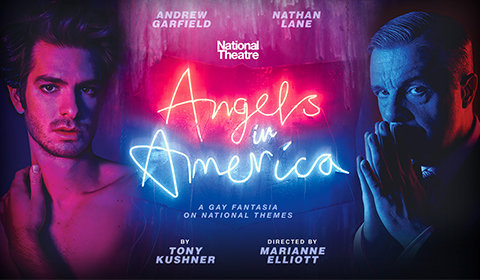 Neil Simon Theatre
0 seat views
25 years after its blazing theatrical debut, Angels in America: A Gay Fantasia on National Themes returns to Broadway with the National Theatre’s stunning revival. Starring Andrew Garfield and Nathan Lane, this incomparable epic set at the dawn of the AIDs crisis plays at the Neil Simon Theatre.

Spanning two parts - Millennium Approaches and Perestroika - Angels in America takes place in the 1980s, when the AIDs epidemic first swept the nation. Though primarily focusing on a gay couple living in Manhattan, it is in practice almost boundless in scope.

With the election of President Reagan looming large, the play embarks on a journey from heaven to earth and across political ideology and personal heartbreak, to deliver a transcendent missive on theology, love, justice and the inevitability of change.

Angels in America first opened on Broadway in 1993, with playwright Tony Kushner winning the Pulitzer Prize for his work. With four Tony Awards, five Drama Desk Awards and a miniseries adaptation to its name, this two-part masterpiece is widely considered a landmark of American theater.

The revival is directed by Marianne Elliott, who brought the Tony Award winning War Horse to Broadway in 2011. Her other credits include The Curious Incident of the Dog in the Night-time. Ian MacNeil provides set design, with costumes from Nicky Gillibrand.

Special notice: Anyone who wants to settle into a true piece of event theater should catch Angels in America on Broadway. With its two parts accounting for almost eight hours, it’s a heady mix of politics, social relationships and fantasy that offers a masterclass in writing, directing and acting.

Angels in America seat view photos show what view you will get for your money. Unfortunately we do not have any seat views for this show.