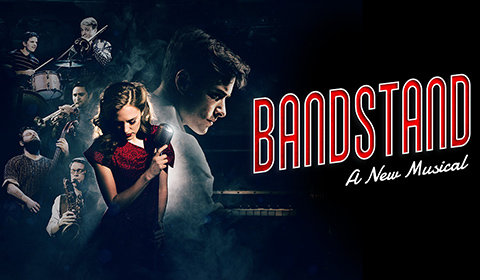 Bernard B. Jacobs Theatre
0 seat views
This all-American story of returned World War II veterans putting a band together in the swingin’ 40s is set to have audiences jitterbugging and shoe-shuffling in the Bernard B Jacobs Theatre. Emotional and uplifting in equal measure, Bandstand is an original musical set to become one of the greats.

After returning from the front-lines with little to his name, Private First Class Donny Novitski (Corey Cott) sees an opportunity to make it big when NCB announces a national competition to find America’s next big music stars. He assembles a rag-tag crew of fellow veterans and together they set the swing scene alight, while each facing their own personal horrors brought on by their time in the war.

Andy Blankenbuehler, the multiple Tony Award-winning director and choreographer behind In the Heights and Hamilton, once again proves his pedigree as one of contemporary Broadway's greats. His choreography pops and jives, while the emotionally truthful performances he draws from his actors pack a serious dramatic punch.

Cot Gigi proves he is a true triple-threat; singing, dancing and acting his heart out as the haunted but hopeful Donny. Laura Osnes (two times Tony nominee for her performances in Cinderella and
Performance dates: 31 Mar 2017 - 17 Sep 2017

Age recommendation: Children under the age of 4 are not permitted in the theatre

Special notice: Lovers of classic swing, jazz and big-band tunes won’t want to miss this show, while any fans of musicals that balance impressive choreography, show-stopping songs and emotionally affecting drama will all find something to enjoy.

Sorry this show closed 17 September 2017, we recommend these similar productions.

Bandstand seat view photos show what view you will get for your money. Unfortunately we do not have any seat views for this show.