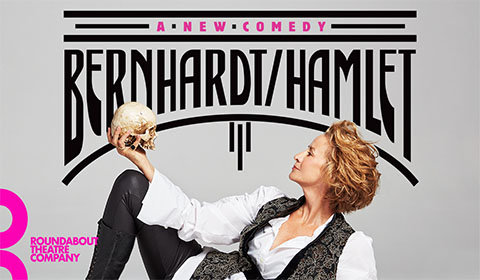 Sarah Bernhardt was an internationally acclaimed stage actress when she decided to take on her most challenging - and risky - role to date: Shakespeare’s melancholy Dane. Amidst controversy and consternation that a woman would speak the famous verse, Bernhardt determinedly played against type. In Bernhardt/Hamlet, her grand Shakespearean ambitions are set against rowdy comedy and personal drama, bringing the story of an acting pioneer to life.

Janet McTeer won the 1997 Tony Award for Best Actress in a Play (A Doll’s House) and has since appeared in Mary Stuart and Les Liaisons Dangereuses. Her film credits include the multi-award-winning comedy Tumbleweeds and Albert Nobbs.

Bernhardt/Hamlet is written by Theresa Rebeck, whose other work includes Mauritius (2007) and Dead Accounts (2012). The show is directed by Moritz von Stuelpnagel, whose 2015 work on Hand to God earned him a Tony Award nomination.

As women’s roles on and off the stage become ever-more central, Bernhardt/Hamlet is the perfect opportunity to look back at those who paved the way. With a whip-smart script and powerful leading actress, don’t miss this world premiere at the American Airlines Theatre, from August 31 2018.

Special notice: Anyone interested in theatrical history should catch Bernhardt/Hamlet, which is sure to deliver plenty of laughs as well as facts. This is also a fantastic opportunity to see the excellent Janet McTeer stretch her acting muscles in a multitude of directions.

Bernhardt/Hamlet seat view photos show what view you will get for your money. Unfortunately we do not have any seat views for this show.