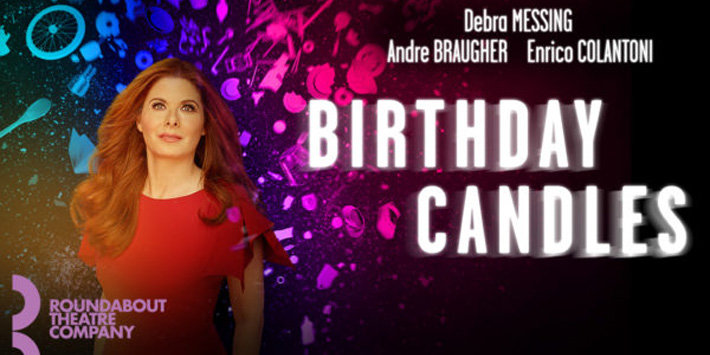 Ernestine Ashworth rings in her 17th birthday with an existential crisis. Worried about her place in the world and how to make her time count, Birthday Candles sees Ernestine on her subsequent 18th, 41st and 70th birthdays as she hits familiar milestones, heralds in new generations… and unfailingly bakes a cake from the hand-me-down family recipe. With figures coming and going and decades traversed over one evening, Haidle’s intimate play ponders the question of what truly makes a life.

Debra Messing is best known for her star turn in Will and Grace on NBC, for which she is a six-time Golden Globe and five-time Primetime Emmy Award nominee. Her previous stage credits include Outside Mullinger and The Naked Truth. She is joined in Birthday Candles by Andre Braugher (Brooklyn Nine-Nine) as Matt, Enrico Colantoni as Kenneth, Crystal Finn as Joan/Alex/Beth, Susannah Flood as Alice/Madeline/Ernie and Christopher Livingston as Billy/John.

Playwright Noah Haidle was commissioned to write Birthday Candles by Detroit Public Theatre, where it premiered in 2018. The show’s move to New York marks his Broadway debut, with previous work including Saturn Returns (2008).

The play is directed by Vivienne Benesch (Producing Artistic Director, PlayMakers Repertory Company), with further cast and creative team to be announced.

Cycling through the life of one woman whose experience will strike a chord in the hearts of many, Birthday Candles at the American Airlines Theatre is an exciting and touching slice of new writing.

Birthday Candles seat view photos show what view you will get for your money. Our users will start adding seat views when the show opens.

Earn double Rewards points by adding your Birthday Candles seat view photo! Use your points for Theatre Tokens and Encore Tickets vouchers and get money off your next theatre trip.