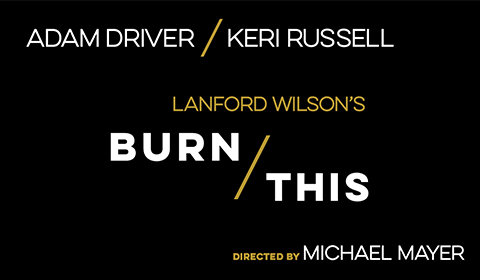 Hudson Theatre
20 seat views
After success on-screen in Star Wars and BlacKKKlansmen, Adam Driver returns to Broadway opposite Keri Russell in Burn This. The revival of Pulitzer Prize-winning writer Lanford Wilson’s intimate and passionate drama plays a strictly limited run at the Hudson Theatre this year.

Burn This centers on the unlikely meeting of Anna and Pale, who are brought together by the death of Pale’s brother and his boyfriend. After the funeral, the pair are caught between the throes of grief and the spark of new attraction, which open up questions and feelings too strong to ignore.

Adam Driver stars as Pale, marking a return to Broadway following previous appearances in Man and Boy and Mrs. Warren’s Profession. He is best known for his screen work, which includes Star Wars: The Force Awakens and an Emmy Award-nominated recurring role in Lena Dunham’s Girls. His co-star Keri Russell has starred in a number of films and television series, including the critically acclaimed FX series The Americans, for which she received three Emmy nominations.

Burn This is written by Lanford Wilson, whose work includes Fifth of July and Talley’s Folly. Before his death in 2011, he won the Pulitzer Prize for Drama and was a member of the Dramatists Guild Council. The show is directed by Michael Mayer (Hedwig and the Angry Inch, American Idiot), with scenic design from Derek McLane, whose work includes Follies, 33 Variations (for which he won a Tony Award) and this year’s Moulin Rouge! The Musical at the Al Hirschfeld Theatre.

Considered by many to be a vital work of modern American drama, Burn This at the Hudson Theatre is a must-see before it closes.

Special notice: Burn This tickets are the perfect choice for anyone wanting to catch two stars of the screen in an intimate and explosive drama by one of America’s most important modern playwrights.

Burn This seat view photos show what view you will get for your money. Unfortunately we do not have any seat views for this show.