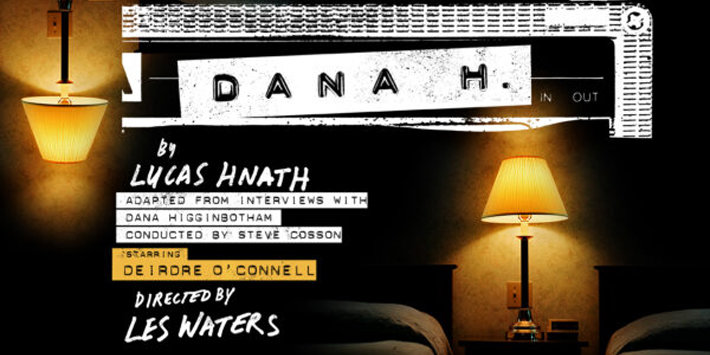 Lucas Hnath’s ground-breaking one-woman play, based on the true story of his mother’s abduction, transfers to Broadway after a stand-out run as part of Vineyard Theatre’s 2019 season.

Told in Dana’s own words and reconstructed for the stage by her son, Dana H. recounts a five month ordeal, as Dana was held captive in numerous Florida hotels. Audiences should be prepared to question their understanding of good and evil in this bold and powerful drama, which defies expectations at every turn.

Dana H. is based on a series of interviews between Dana Higginbothom and Steve Cosson, adapted by Obie Award winner Lucas Hnath (Red Speedo; The Christians) and directed by Les Waters.

Deirdre O'Connell reprises the role of Dana, after appearing in the play’s Off-Broadway production to critical acclaim in 2019.

Hailed as “truly mesmerizing” (The Daily Beast(), Dana H. tickets form part of an unmissable repertory season at the Lyceum Theatre, alongside Is This A Room.

Special notice: This production includes a sustained sequence of flashing lights and audio dissonance, as well as two extended periods of darkness. It also contains traumatic content and adult language. For more info, contact Telecharge Customer Service at 212-239-6210 or tickets@telecharge.com.

Dana H. seat view photos show what view you will get for your money. Unfortunately we do not have any seat views for this show.