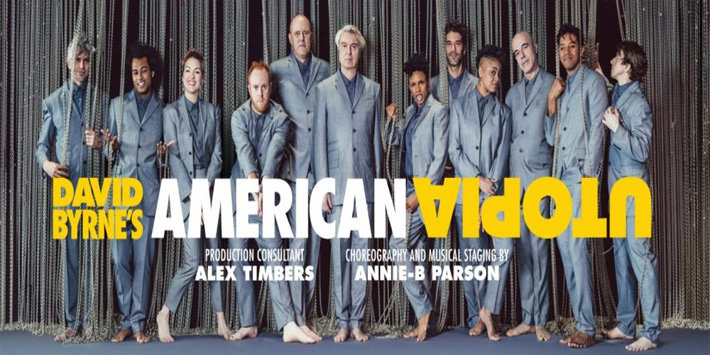 Taking inspiration from Byrne’s 2018 album of the same name and his extensive back catalogue, American Utopia features a diverse and eclectic team of 11 international artists including Jacquelene Acevedo, Karl Mansfield and Angie Swan. Having already dazzled audiences worldwide, the show returns to New York for a second round of rock music, theatrical choreography and political allegories.

Byrne is best-known as a member of Talking Heads, with his career also spanning work as a one-man musician and as the writer of Off-Broadway shows Here Lies Love (2013) and Joan of Arc: Into the Fire (2017). He counts Academy Awards, Grammys and Golden Globes to his name, and has been inducted into the Rock and Roll Hall of Fame.

American Utopia is directed by Karl Mansfield (The Last Ship) and choreographed by Annie-B Parson, with lighting by Rob Sinclair.

Age recommendation: Suitable for all ages. Under 4s not permitted.

Special notice: Please note that this production uses strobe lights during one part of the show.

David Byrne's American Utopia seat view photos show what view you will get for your money. Unfortunately we do not have any seat views for this show.