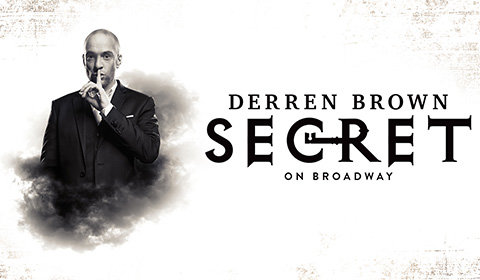 Derren Brown: Secret challenges audiences to re-examine the beliefs and stories that influence our lives and relationships. Expect a unique blend of mind reading, illusions and the art of persuasion to feature in this daring show from one of the UK’s most acclaimed psychological showmen.

Derren Brown made his television debut in 2000 with Derren Brown: Mind Control and has gone on to become one of the UK’s foremost entertainers, best known for impressive feats of artifice and misdirection. He is a three-time winner of the Olivier Award for Best Entertainment for Something Wicked This Way Comes (2006), Enigma (2010) and Svengali (2012). His most recent television special, Sacrifice, aired on Netflix in 2018.

The show is co-written and co-directed by Andy Nyman and Andrew O’Connor, both long-term collaborators with Brown. Nyman’s credits include the Olivier Award-winning Something Wicked This Way Comes (2006) and the film adaptation of Ghost Stories (2018), starring Martin Freeman. O’Connor is a magician, comedian and actor who has co-produced all of Brown’s television programmes. His television series have won 5 BAFTAs.

Get ready to enjoy an evening in the deepest corners of the mind. Derren Brown: Secret at the Cort Theatre opens on September 6 2019.

Special notice: Fans of Derren Brown’s astonishing Netflix shows will want to secure tickets to his Broadway premier. Anyone intrigued by psychological magic shows such as The Illusionists will also be entertained and amazed by Brown’s singular talent.

Derren Brown: Secret seat view photos show what view you will get for your money. Unfortunately we do not have any seat views for this show.