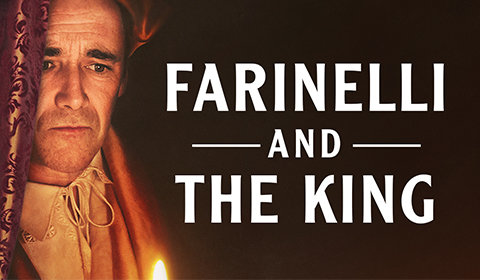 Farinelli and the King tickets

King Philippe V of Spain is afflicted by insomnia, lying restless in his chambers each night. His Queen, anxious for a remedy and wary of courtly murmurings, enlists Farinelli – a singer whose heavenly voice captivates all within earshot. Philippe is entranced by the man’s talents and pleads with him to stay. But with fame in the European opera houses at stake, can Farinelli be content with a royal audience of one?

Farinelli and the King premiered at London’s Sam Wanamaker Playhouse, receiving six Olivier Award nominations. It subsequently transferred to the Duke of York’s Theatre for a limited West End run.

Mark Rylance stars as King Philippe V. He has twice won the Tony Award for Best Actor in a Play (Boeing-Boeing and Jerusalem) with a further win for Best Featured Actor in a Play (Twelfth Night). Having long been acclaimed as a stage actor, Rylance garnered international attention for his performance as Russian intelligence officer Rudolf Abel in Bridge of Spies.

The play features musical arrangement by Claire van Kampen, who also wrote the script. She has previously collaborated with Rylance on Boeing-Boeing and Twelfth Night. Farinelli and the King is directed by John Dove, with design from Jonathan Fensom.

With beautiful music and sumptuous set design, Farinelli and the King at the Belasco Theatre is a treat for all the senses. It begins previews on December 5 2017, with opening night set for December 17.

Special notice: Fans of Mark Rylance should snap up tickets for his first return to Broadway since winning an Oscar. This luxuriously designed and directed play is also perfect for anyone who enjoys period dramas and historical stories.

Farinelli and the King seat view photos show what view you will get for your money. Unfortunately we do not have any seat views for this show.