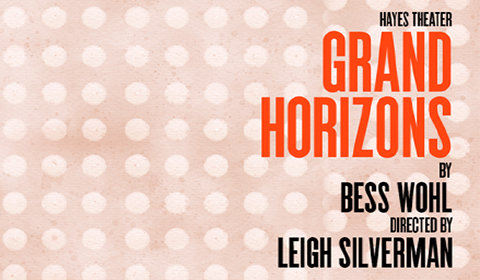 Bill and Nancy have been married for half a century – long enough to be totally in synch, according to everyone who knows them. After years of work and raising their sons Brian and Ben, the couple finally decide to settle down at senior community Grand Horizons… that is, until Nancy walks out. With plenty of humour amidst the crushing body blows of family drama, this new play questions how well we truly know each other and explores how love can transform in unpredictable ways.

The play was co-commissioned by Williamstown Theatre Festival and Second Stage Theater, with playwright Bess Wohl already having both John Gassner and Sam Norkin Off Broadway awards to her name. Prior to her Broadway debut, her resume included Small Mouth Sounds and American Hero.

Grand Horizons is directed by Tony and Drama Desk nominee Leigh Silverman (Violet; The Lifespan of a Fact). The creative team also includes Tony Award winning scenic designer Clint Ramos (Torch Song; Once On This Island) and lighting designer Jen Schriever (What the Constitution Means To Me).

Both funny and painful, Grand Horizons at the Hayes Theater is a completely unique look at the surprising and changeable nature of love. It begins previews on December 20 2019, with opening night set for January 23 2020.

Special notice: Fans of new writing should snap up tickets to Grand Horizons, which promises to be both poignant and entertaining.

Grand Horizons seat view photos show what view you will get for your money. Unfortunately we do not have any seat views for this show.