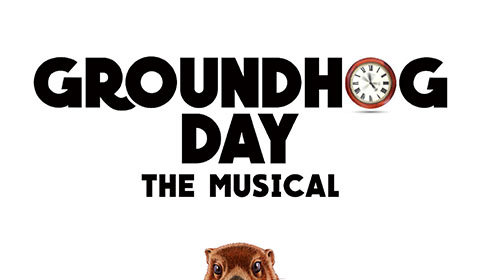 August Wilson Theatre
0 seat views
In the role that won him the 2017 Olivier, Drama Desk and Outer Critics Award for Best Actor, Andy Karl plays Phil Connors in Groundhog Day, the hit musical based on critically-acclaimed 1993 film of the same name.

Phil Connors is a disgruntled big-city weatherman forced out to a small town to cover their annual event, Groundhog Day. Before long, he finds himself mysteriously reliving the same day over and over and over again—with no consequences, no regrets, and no tomorrows. Soon enough, he starts getting to know associate TV producer Rita Hanson, and discovers it’s a day of second, third and fourth chances. The more he gets to know her, however, the more he wishes tomorrow would come.

Andy Karl (Legally Blonde, 9 to 5) reprises his Oliver-award winning role as Phil Connors, with Barrett Doss (You Can’t Take It With You) as Rita. Vishal Vaidya, John Sanders and Rebecca Faulkenberry join them as Larry, Ned and Nancy, respectively.

Groundhog Day features an original score by Tim Minchin, the acclaimed musical comedian and writer of Matilda the Musical’s beloved score, and book by Danny Rubin, screenwriter of the original 1993 film. Matthew Warchus collaborates with Minchin once again, following their work together on Matilda, to direct.

A new interpretation of one of the most highly acclaimed movies of recent years, Groundhog Day is a modern triumph not to be missed.

Special notice: Fans of the original movie should be sure to catch this new musical adaptation, and any fans of Tim Minchin will be sure to love his latest musical offering.

Groundhog Day seat view photos show what view you will get for your money. Unfortunately we do not have any seat views for this show.