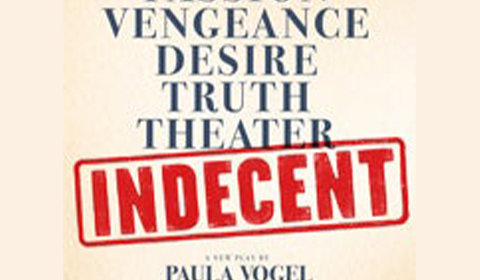 Recounting God of Vengeance’s journey from its writer’s Polish homeland to a premier in New York, Indecent dramatizes the struggle between those who condemned the play for blasphemy, and the fans who believed it was a seminal piece of Jewish culture. As actors and creatives are caught in a huge controversy, Vogel’s play recounts the history of a landmark piece of theater which placed its supporters’ careers on the line.

Sholem Asch’s play was originally written in Yiddish and caused consternation for its depiction of a same-sex relationship between a prostitute and a brothel owner’s daughter. It was translated into English with some changes upon arrival in New York, and caused a major conflict between Orthodox and radical Yiddish newspapers.

Playwright Paula Vogel won the Pulitzer Prize for Drama in 1998 for How I Learned to Drive. A former playwright in residence at Yale Repertory Theatre, Indecent marks her Broadway debut.

The show is directed by Rebecca Taichman, whose other credits include Familiar at Playwrights Horizons and The Scene at Second Stage Theatre. Other creatives include choreographer David Dorfman and set designer Riccardo Hernandez.

Covering themes including blasphemy, homophobia, anti-Semitism and freedom of speech, Indecent is an essential account of theater history. It opens at the Cort Theatre, with press night on April 18 2017.

Special notice: Anyone interested in the social and political history of Broadway will find Indecent’s tale fascinating. With an array of timely themes at its core, the play is a standout example of new writing amongst some of Broadway’s long-running hits.

Indecent seat view photos show what view you will get for your money. Unfortunately we do not have any seat views for this show.