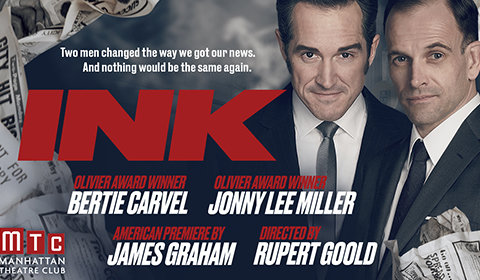 Beginning in 1960s London, Ink tells the story of notorious media mogul Rupert Murdoch. After purchasing The Sun, then a struggling newspaper, he is determined to make it a market-dominating success that beats out all competition. With the help of rogue editor Larry Lamb and an unlikely group of reporters, there’s no telling where they’ll stop to get the best story and the most coverage.

Bertie Carvel reprises his role as Rupert Murdoch, having won an Olivier Award for the part at the Almeida Theatre. Other credits include Miss Trunchbull in Matilda the Musical. He is joined on Broadway by Jonny Lee Miller as Larry Lamb, with previous credits including an Olivier Award-winning turn alongside Benedict Cumberbatch in Frankenstein at the National Theatre.

Playwright James Graham is no stranger to Broadway, with his previous drama Privacy transferring from London’s Donmar Warehouse to New York’s Public Theater in 2016. He wrote the book for Finding Neverland the musical, and most recently penned Brexit: The Uncivil War for television.

Ink is directed by Rupert Goold, who is currently Artistic Director at London’s Almeida Theatre. His previous Broadway credits include American Psycho at the Gerald Schoenfeld Theatre. Other creatives include set and costume designer Bunny Christie, whose work has earned her three Olivier Awards. She most recently won for Marianne Elliott’s revival of Company.

Exposing the sensational rat-race behind the news cycle, Ink is a unique and electrifying new play from one of the UK’s top young dramatists, now playing at the Samuel J. Friedman Theatre.

Special notice: Fans of James Graham’s previous Broadway transfer, Privacy, will want to snap up tickets for Ink this year. With an award-winning cast and creative team and a timely subject matter, the play should also be on the list of anyone who enjoys modern, politically-minded drama.

Ink seat view photos show what view you will get for your money. Unfortunately we do not have any seat views for this show.