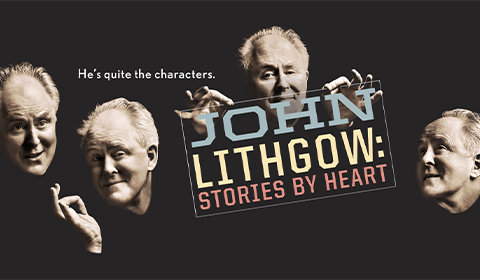 Covering murder, bullying and deception and a hilarious caper led by a mischievous uncle, audiences can expect to see the actor stretch his performance muscles in masterful readings of Ring Lardner’s “Haircut” and P. G. Wodehouse’s “Uncle Fred Flits By”.

As he invokes the mannerisms of classic and beloved characters, Lithgow masterfully transforms from voice to voice whilst sharing extra anecdotes about his own family’s relationship to short stories. From tales told by his father to those he told his parents, John Lithgow: Stories By Heart is a thrilling and nostalgic tour-de-force.

John Lithgow is a two-time Tony Award winner (The Changing Room; Sweet Smell of Success) and six-time Emmy Award winner. Outside of theater, his numerous television and film credits include NBC’s 3rd Rock from the Sun, Terms of Endearment and Footloose. More recently, he has appeared in Netflix’s hit period drama The Crown as Winston Churchill, receiving a Primetime Emmy Award for his performance.

John Lithgow: Stories By Heart on Broadway is directed by Tony and Drama Desk Award winner Daniel Sullivan, whose previous credits include Conversations with My Father and The Little Foxes. Set design is provided by John Lee Beatty (The Color Purple), with costume design by Jess Goldstein (Newsies) and lighting design by Kenneth Posner (Mean Girls).

Settle in for an evening of masterful storytelling from one of our acting greats. John Lithgow: Stories By Heart at the American Airlines Theatre begins previews on December 21 2017, with opening night set for January 11 2018.

Special notice: Fans of John Lithgow’s varied acting career will find plenty of joy in this intimate evening of readings. Stories By Heart tickets are also a must for fans of the short story form.

John Lithgow: Stories By Heart seat view photos show what view you will get for your money. Unfortunately we do not have any seat views for this show.