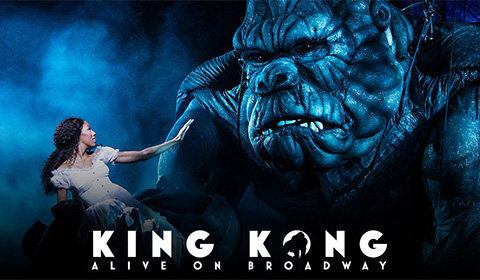 Broadway Theatre
44 seat views
A ground-breaking classic of American cinema, King Kong has gripped audiences for decades. Now Jack Thorne (Harry Potter and the Cursed Child) brings the giant to life once more in King Kong the musical at the Broadway Theatre.

King Kong takes audiences on an emotional journey through the eyes of young actress Ann Darrow. Dreaming of a big break, she joins filmmaker Carl Denham on a voyage to the mysterious Skull Island. What greets them is something they could never have imagined: an enormous ape known only as “Kong”. The two New Yorkers are faced with a striking moral dilemma... do they profit from this magnificent creature, or leave him in peace? Using heart-pounding animatronics and puppetry, King Kong the musical is the ultimate story pitting man versus nature and greed versus humanity.

Christiani Pitts stars as Ann Darrow, with previous credits including A Bronx Tale on Broadway and regional productions of Big Fish and Cabaret. Eric William Morris joins Pitts as Carl Denham; he has previously performed in Mamma Mia!, and Coram Boy. King Kong himself is thrillingly realized with a team including aerial movement director Gavin Robbins (DreamWorks’ How to Train Your Dragon).

King Kong is directed and choreographed by Olivier Award winner Drew McOnie (Jesus Christ Superstar, Strictly Ballroom), with a powerful score by Marius de Vries, who won BAFTA Awards for his work on Baz Luhrmann’s Romeo + Juliet and Moulin Rouge!, and Eddie Perfect (Beetlejuice The Musical). The creative team also includes a book by Jack Thorne, who is best known for his work on Harry Potter and the Cursed Child, currently bewitching audiences at the Lyric Theatre.

An emotional and exhilarating production that sees the king of movie monsters rule the stage, King Kong at the Broadway Theatre has been playing to rapt audiences since October 2018.

Age recommendation: Recommended 8+. No under 4s.

Special notice: With an iconic beauty-and-the-beast story and heart-stopping puppetry, King Kong tickets are the perfect choice for those wanting a bombastic Broadway experience. Fans of the 1933 movie will also be thrilled to see Kong come alive onstage.

King Kong seat view photos show what view you will get for your money. Unfortunately we do not have any seat views for this show.