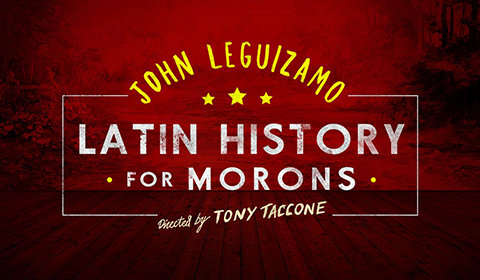 Studio 54 Theatre
0 seat views
Actor, writer and comedian John Leguizamo brings his one-man show to Broadway, recounting 3,000 years of Latin history in a swift 90 minutes. Starting with the Aztecs and working up to present day, Latin History for Morons gives audiences an insight into the events missing from their high school textbooks.

Inspired by his son’s history project assignment, Leguizamo’s tour-de-force of a show speeds from the Aztecs to modern America, revealing the largely ignored history of Latinos throughout. From the Civil War to Pitbull and conquistadors to 20th century actors, this one-man show is a celebration of unsung heroes, a missive on America’s whitewashed history, and an exploration of hidden truths.

John Leguizamo is an actor, writer and comedian who first came to fame as Luigi in Super Mario Bros. With a resume that covers everything from Baz Lurhmann’s Romeo + Juliet to Ice Age, his previous solo stage shows have drawn praise for their satirical and outrageous brand of humor. Latin History for Morons now heads to Broadway following acclaimed runs at Berkeley Repertory Theater and The Public Theater.

Get ready to take notes: Latin History for Morons is a rollercoaster ride full of bizarre facts, larger than life characters and truth that is stranger than fiction. It runs at Studio 54 Theatre from October 19 2017.

Special notice: History buffs might want to catch Latin History for Morons for some new insights, whilst any comedy or politics fans are sure to find plenty to enjoy in Leguizamo’s unique brand of humor.

Latin History for Morons seat view photos show what view you will get for your money. Unfortunately we do not have any seat views for this show.