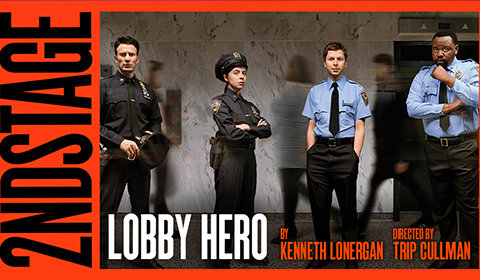 Hayes Theater
0 seat views
The inaugural production of the newly refurbished Hayes Theater under new owners, Second Stage Theater, Lobby Hero is a compelling, contemporary American comedy/drama featuring a small but all-star cast and an astute script that is perfectly suited to the intimate surroundings of Broadway’s smallest theater.

Lobby Hero takes place in the lobby of a respectable Manhatten apartment building over the course of one night in which a murder investigation is taking place. Jeff (Michael Cera) is a security guard in his late-twenties who is awkward, unlucky in love and working under the watchful eye of his strict but caring supervisor William (Brian Tyree Henry). Jeff has strong feelings for rookie cop Dawn (Bel Powley), who doesn’t notice as she is too enamoured with her vain and macho senior partner Bill (played by Captain America himself, Chris Evans). These four fleshed-out and recognisable characters must all come to face difficult questions of integrity and duty when William’s brother is accused of a murder he may or may not have committed.

As can be expected from such a cast of this calibre, the acting in Lobby Hero is superb, especially in the way it works as an ensemble piece rather than a vehicle for any single performer. Michael Cera (Arrested Development, Scott Pilgrim vs. the WorldThe Avengers) shows a great balance of swagger and depth as the morally shady Bill. Bel Powley (best known for Diary of a Teenage Girl) displays great nuance as a naïve young cop trying to look tough and being forced to make difficult choices in the ways she interacts with those around her as the moral dilemmas pile up. Brian Tyree Henry (Emmy-nominee for his role in FX’s Atlanta) displays incredible range as a devoted family-man and person of great integrity who is tied into moral knots in dealing with his brother’s supposed crimes.

Writer Kenneth Lonergan (who won an Oscar for Manchester by the Sea) is well-regarded for his skill in writing ensemble pieces that portray people for the ethically complicated and contradictory creatures that they are. In Lobby Hero Lonergan touches upon issues of race, sexism, power-dynamics and personal ethics – all anchored with compelling and believable dialogue.

Trip Cullman (Six Degrees of Separation) directs the talented cast with consummate skill and David Rockwell, who designed the updated interiors for the Hayes Theater, has created a set that is attractive and authentic, rotating at key moments to cleverly draw attention to to the action.

Special notice: Lovers of intelligent, contemporary writing will find a lot to like in Lobby Hero. Meanwhile, the many, many fans of Chris Evans and Michael Cera out there will not want to miss the chance to see them shine in this intimate, thought-provoking play.

Lobby Hero seat view photos show what view you will get for your money. Unfortunately we do not have any seat views for this show.