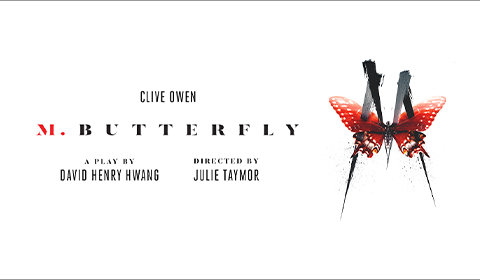 James Earl Jones Theatre
0 seat views
Clive Owen returns to the stage for a revival of M. Butterfly at the Cort Theatre. The Tony Award winning modern classic first opened in 1988 at Washington D.C.’s National Theatre, before an acclaimed run at the Eugene O’Neill Theatre.

Inspired by the opera Madame Butterfly, M. Butterfly follows the remarkable story of French diplomat Rene Gallimard as he falls in love with Chinese opera singer Song Liling. Over the course of 20 years their relationship stretches across continents, culture and gender barriers, all interwoven in a thrilling tale of espionage.

Clive Owen (Rene Gallimard) is an Academy Award nominated actor whose best-known roles include Larry in Closer (2004) - for which he won Golden Globe and BAFTA awards; and Dr. Thackery in Cinemax’s The Knick.

He is joined in the play by Jin Ha as Song Liling and Enid Graham (The Curious Incident of the Dog in the Night-time) as Gallimard’s betrayed wife Agnes. Further casting includes Murray Bartlett, Celeste Den and Michael Countryman.

Playwright David Henry Hwang is a two-time Pulitzer Prize for Drama finalist, with other work including Chinglish and Yellow Face. He became the first Asian American to win the Tony Award for Best Play for M. Butterfly.

This revival is directed by Tony and Drama Desk Award winner Julie Taymor, a Broadway titan thanks to her astounding vision in Disney’s The Lion King. She is joined by choreographer Ma Cong, set designer Paul Steinberg and costume designer Constance Hoffman.

An epic romance with themes that staggered audiences thirty years ago, M. Butterfly’s return to Broadway is unmissable. It begins previews at the Cort Theatre on October 7 2017, with opening night set for October 26.

Special notice: Fans of David Henry Hwang’s other work, such as Chinglish should secure tickets for this highly anticipated revival of his epic and award winning M. Butterfly. Clive Owen’s starry role is also worth the admission price.

M. Butterfly seat view photos show what view you will get for your money. Unfortunately we do not have any seat views for this show.