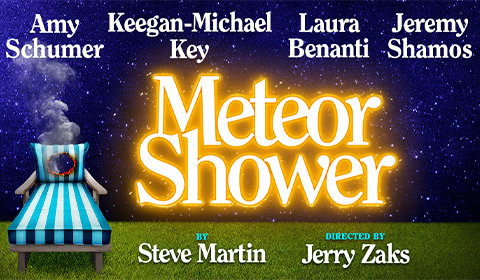 On a hot night in Ojai, California, Corky and her husband Norm are hosting dinner for new friends Laura and Gerald. Expecting a relaxed evening of small talk and good food, they’re instead greeted by aggression and marital strife. As meteors tear across the sky above, the heat and danger of space is rapidly matched by flaring tensions below.

Amy Schumer (Corky) is a comedian best-known for comedy sketch show Inside Amy Schumer and made her screenwriting and acting debut in 2013’s Trainwreck. She is a recipient of the Peabody and Primetime Emmy Awards, and makes her theater debut in Meteor Shower.

The play is written by Drama Desk Award winner Steve Martin, whose other work include Tony Award nominated musical Bright Star. The creative team includes director Jerry Zaks, a four-time Tony Award winner with credits including Sister Act and A Funn Thing Happened on the Way to the Forum; designer Beowulf Boritt (Come From Away) and costume designer Anne Roth (The Book of Mormon; The Iceman Cometh).

With personal battles as fiery as the space rocks soaring overhead, Meteor Shower at the Booth Theatre is sure to be a comedic hit for the new Broadway season. It begins previews on November 1 2017, with opening night set for November 29.

Special notice: Fans of Amy Schumer won’t want to miss out on her first Broadway role, whilst anyone looking for a light-hearted but witty comedy should secure tickets for Meteor Shower.

Meteor Shower seat view photos show what view you will get for your money. Unfortunately we do not have any seat views for this show.