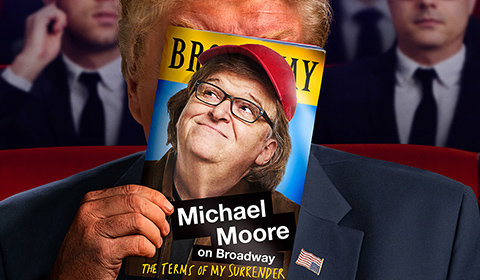 Michael Moore on Broadway: The Terms of My Surrender tickets

Belasco Theatre
0 seat views
Michael Moore, the Oscar-winning documentary filmmaker behind Bowling for Columbine and Fahrenheit 9/11 brings his familiar brand of political activism to the Belasco Theatre in his first Broadway show; The Terms of My Surrender.

After tackling such divisive topics in his films as gun-laws and the invasion of Iraq, Moore turns his attention to one target in his broadway debut – President Trump. As one of the country’s most recognisable liberal firebrands, Moore has taken issue with Trump’s presidency and issues a rallying cry to all who share his convictions.

But it’s not just an evening of fiery political hectoring that Moore offers in The Terms of My Surrender. This is also a retrospective look at Moore’s career as both a filmmaker and activist, with anecdotes and personal stories – as well as some political sketches and interviews with special guests on certain nights.

Broadway veteran Michael Mayer, who won a Tony for his direction of Spring Awakening adds some theatrical flair to the proceedings to ensure that what occurs on stage is not simply a 135-minute lecture.

Michael Moore may be a controversial figure for many, but his passion and his humanity have been clear in all his works – and now audiences can see this first-hand at the Belasco Theatre in The Terms of My Surrender.

Special notice: Anyone who, like Michael Moore, feels burned and frustrated by the Trump administration will find solace amongst like-minded people at the Belasco Theatre. Fans of Moore’s films will enjoy seeing him in person and hearing some insight into his life and career.

Michael Moore on Broadway: The Terms of My Surrender seat view photos show what view you will get for your money. Unfortunately we do not have any seat views for this show.