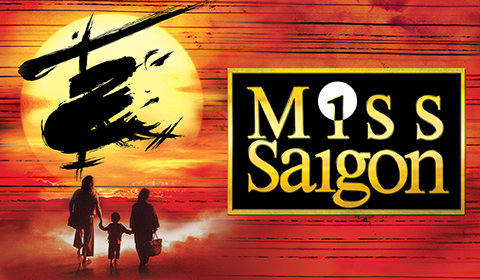 Broadway Theatre
0 seat views
The West End revival of Miss Saigon transfers with great acclaim to Broadway, with rising star Eva Noblezada in the lead role. Set towards the close of the Vietnam War, this stirring and epic musical is staged at the Broadway Theatre.

The final days of the Vietnam War are approaching, and 17-year-old Kim is working in a Saigon bar under the eye of sleazy owner The Engineer. When American G.I. Chris walks into the bar, the pair strike up a fragile romance that is shattered by the fall of the city. As survivors reckon with the human cost of the conflict, Kim embarks on an epic three-year journey to find her way back to Chris – and unite him with his son.

With a renewed focus on the human cost of the war, this revival of Miss Saigon features classic songs including "Sun and Moon" and "I Still Believe".

Miss Saigon at the Broadway Theatre feature members of the West End cast, including Eva Noblezada in her Broadway debut as Kim, Jon Jon Briones as The Engineer, and Alistair Brammer (War Horse) as Chris.

The musical is inspired by Giacomo Puccini's Madame Butterfly, with a book and lyrics by Alain Boublil and concept, book and music by Claude-Michel Schönberg. Boublil and Schönberg have previously collaborated on multi-award-winning classic Les Misérables, which was last seen on Broadway between 2014 and 2016. This revival features direction from Laurence Connor (Jesus Christ Superstar, School of Rock).

With a sweeping, heart-breaking love story set against the trauma of the Vietnam War, Miss Saigon at the Broadway Theatre is a stunning revival of the original 1991 production, playing from March 1 2017.

Special notice: Fans of Les Misérables should give Miss Saigon a try, with its epic score from the same lyricists and composers. Anyone with an interest in recent US history and the human side of conflict will also find this a deeply affecting tale.

Miss Saigon seat view photos show what view you will get for your money. Unfortunately we do not have any seat views for this show.