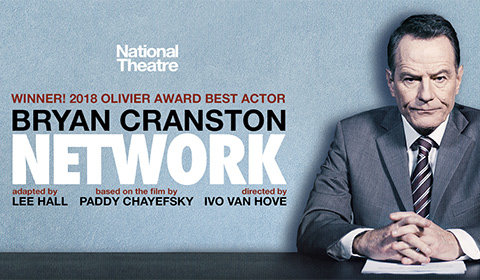 Belasco Theatre
15 seat views
Following a sold out run at London’s National Theatre, Network transfers to Broadway’s Belasco Theatre for a limited engagement. Based on the Academy Award-winning 1976 film, this new play by Lee Hall and visionary director Ivo van Hove shines a satirical light on fake news and media manipulations, with a soaring central performance from Bryan Cranston.

News anchorman Howard Beale can’t seem to get viewers tuning in, until he spectacularly unravels live on-air. As ratings soar, his network seizes the opportunity to capitalize on their unlikely new star and Howard suddenly becomes the biggest thing on TV. Combining live performance with an immersive multimedia set, Network is a darkly funny play delving into fake news and the rise of populism.

Bryan Cranston reprises his role as Howard Beale for this Network in New York. He is best known for Breaking Bad on television, with other theater credits including All the Way and The God of Hell. He is joined by Emmy Award-winning Tatiana Masley (Orphan Black), making her Broadway debut as Diana Christensen, and Tony Goldwyn as Max Schumacher.

Network is adapted for the stage by Lee Hall, whose other credits include Billy Elliot and Our Ladies of Perpetual Succour. Ivo van Hove directs, adding to an award-winning resume including A View from the Bridge at the Lyceum Theatre and All About Eve in the West End. The creative team also includes set and lighting designer Jan Versweyveld and video designer Tal Yarden.

A thrilling and timely production which earned Bryan Cranston an Olivier Award for Best Actor in a Play (2018) and the 2019 Tony Award for Best Performance by an Actor in a Leading Role (Play), Network is currently playing to high acclaim at the Belasco Theatre.

Special notice: Anyone interested in prescient social satires and a peek behind the curtain of big media companies will want to grab Network tickets. With Bryan Cranston delivering a top-notch performance worthy of his Breaking Bad heyday, this is one limited run you don’t want to miss out on.

Network seat view photos show what view you will get for your money. Unfortunately we do not have any seat views for this show.