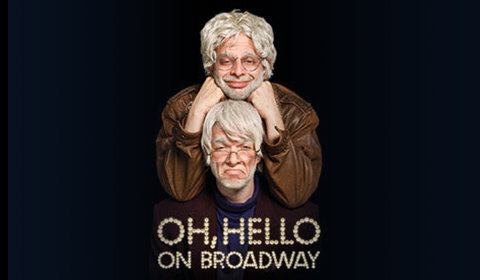 Lyceum Theatre
0 seat views
From New York comedy clubs to Comedy Central, Nick Kroll and John Mulaney created a cult-hit with the The Oh, Hello Show, playing geriatric and morally questionable Manhatten duo Gil Faizon (Kroll) and George St Geegland (Mulaney). They now bring their comedy creations to the Lyceum Theatre with The Oh, Hello Show on Broadway, promising a night of big laughs, turtleneck sweaters and “Too Much Tuna.”

Speaking of “Too Much Tuna”, performances will sometimes feature a special guest to take part in the infamous prank. Just like the ridiculous sandwiches of that popular segment, the entire night promises to be over-stuffed with the kind of antics the duo is best known for. Silly, inappropriate, wonderfully crass and often surprisingly astute, The Oh, Hello Show is a guaranteed whirlwind of humour inspired by life on the Upper West Side of Manhatten.

Alex Timbers (who won a Tony Award for Peter and the Starcatcher) directs this madcap 90 minutes, and proves that he is on the same wavelength as Kroll and Mulaney – skilfully taking them from beat-to-beat while allowing their own chemistry and skill with improvisation to be real drive of the show.

This is an unusual and riotously strange evening in a Broadway theatre, one that will definitely prove unique and entertaining, while offering the kind of fun that would usually be more associated with alternative comedy dens or late-night television.

Special notice: Fans of off-beat comedy and anyone with a robust sense of humour.

Oh, Hello on Broadway seat view photos show what view you will get for your money. Unfortunately we do not have any seat views for this show.