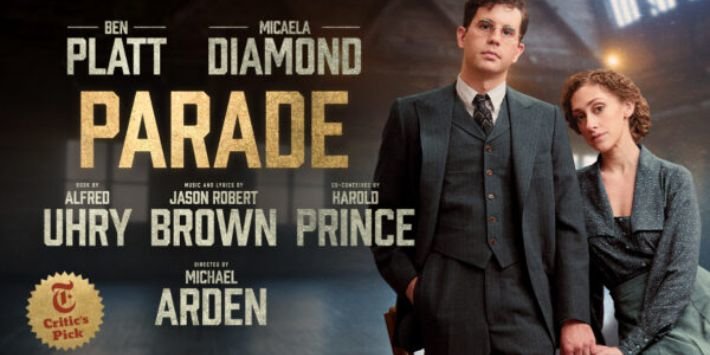 A revival packed with talent

Ben Platt and rising star Micaela Diamond star in the Broadway transfer of New York City Center's standout revival of Parade on Broadway. This landmark musical runs at the Bernard B. Jacobs Theatre for a limited season, and promises to be one of the hottest tickets this year.

Newlywed Jewish couple Leo and Lucille Frank are struggling to make a life in the red hills of Georgia. When Leo is accused of a shocking crime, their lives are thrown into a disarray that threatens to tear them apart. Inspired by a true story, Parade is a riveting tale of devotion, justice and faith.

Jason Robert Brown and Alfred Uhry's Parade musical is one of American theater's gold-standard shows, with a powerfully affecting story and sweeping music.

Tony Award winner Ben Platt (Dear Evan Hansen stars as Leo Frank, opposite Micaela Diamond (The Cher Show) as Lucille Frank. They are directed in this visionary production by Tony Award winner Michael Arden (Once On This Island).

Hailed as a "powerhouse" (The New York Times) production with unforgettable performances, book Parade Broadway tickets before they sell out!

Special notice: Ben Platt will not perform on Friday, May 19 and Saturday, May 20.

Parade seat view photos show what view you will get for your money. Our users will start adding seat views when the show opens.