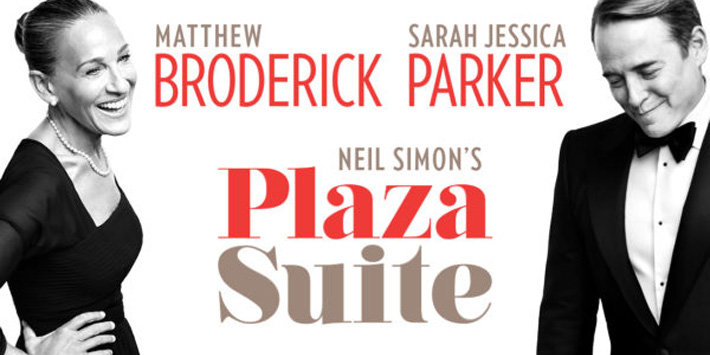 Karen wants to inject the passion back into her marriage with Sam, Muriel is wary of her former flame’s lady-killer reputation, and Frank is coaxing his panicked wife out of the bathroom before their daughter’s wedding. Three couples, one room in a New York hotel: if walls could talk, Suite 719 would keep us engaged for hours!

Hailed by critics as yet another gem from one of America’s best-loved playwrights, Plaza Suite is a hilariously sharp excavation of love and lust in all its dysfunctional glory.

Sarah Jessica Parker and Matthew Broderick play all three couples in this new production of Plaza Suite. Parker, best known for Sex and the City, is the recipient of two Emmys and four Golden Globes; and Broderick is a Tony Award winner for How to Succeed in Business Without Really Trying and Brighton Beach Memoirs.

Plaza Suite playwright Neil Simon was a Pulitzer Prize winner and the mind behind Broadway classics including The Odd Couple and Sweet Charity. This revival of his play is directed by Tony Award winner John Benjamin Hickey, best known for acting work in The Normal Heart and The Inheritance. Tony Award winning composer Marc Shaiman (Hairspray) provides new music for the show.

Fans of Sarah Jessica Parker and Matthew Broderick should snap up tickets for the chance to see their masterful two-hander in Plaza Suite, whilst anyone who enjoys Neil Simon’s other work will find plenty of his witticisms in this revival.

Plaza Suite seat view photos show what view you will get for your money. Our users will start adding seat views when the show opens.

Earn double Rewards points by adding your Plaza Suite seat view photo! Use your points for Theatre Tokens and Encore Tickets vouchers and get money off your next theatre trip.