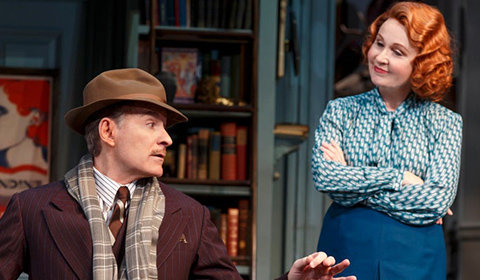 St James Theatre
0 seat views
Since it first opened in London in 1945, Present Laughter has proven over countless revivals that it is a timeless classic. One of Noel Coward’s great comedies, Present Laughter is a semi-autobiographical depiction of a well-loved but self-obsessed actor in the throes of a mid-life crisis. Oscar-winner, Kevin Kline (A Fish Called Wanda) takes the lead in this lavish production at the St James Theatre.

Gary Essendine (Kline), who Coward partly based on himself, is a matinee idol unsatisfied with his work, estranged from his wife and indulging a little too much in his vices; namely, drink and women. With a tour of Africa looming ahead of him, Gary crosses paths with a doting female fan, a self-serving seductress (who happens to be the wife of his business partner) and an unhinged playwright. Essendine tries to navigate these encounters with hilarious results.

Moritz von Stuelpnagel (Tony nominee for Hand to God) directs this lavish production with a keen understanding of pace and comic timing. Central to the piece, of course, is Kline’s outstanding performance as Gary, but he is well-supported by an excellent ensemble of players in the other larger-than-life roles. Kate Burton (Hedda Gabler) shines as Gary’s long-suffering wife Liz, while Cobie Smulders (best known for TV sitcom How I Met Your Mother) gives a cool performance as the alluring Joanna and Bhavesh Patel (War Horse) is hilariously creepy as obsessive playwright, Roland.

The pedigree of the performers and the luscious set by David Zinn make this a production of Coward’s legendary comedy at the St James Theatre that cannot be missed.

Special notice: Fan’s of Noel Coward – of which there are many – should not miss this Broadway revival of one of his greatest comedies. Anyone who enjoys Kevin Kline’s masterful comic performances in films such as A Fish Called Wanda and In & Out are guaranteed to enjoy Present Laughter.

Present Laughter seat view photos show what view you will get for your money. Unfortunately we do not have any seat views for this show.