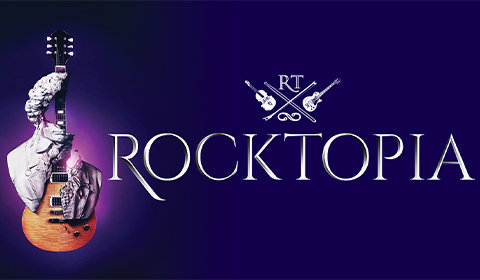 Broadway Theatre
0 seat views
What happens when you mix the odes of Beethoven with The Who’s screaming guitar solos? Thanks to Rocktopia, you’re about to find out. This genre-busting showcase of iconic classical music and beloved 20th century rock anthems is set to tear up the Broadway Theatre this year.

Featuring five internationally acclaimed vocalists, a symphony orchestra, an exhilarating rock band and a powerful backing choir, Rocktopia is an epic fusion of music across the centuries. Whether it’s the operatic grandeur of Queen set against the odes of Beethoven, or the poetry of Puccini up against the power of Led Zeppelin, this new revolution must be heard to be believed.

Music supervision is provided by Kim Scharnberg (Jekyll and Hyde; Wonderland), with music direction from Tony Bruno and costumes by Cynthia Nordstrom (Dance of the Vampires).

With a multimedia extravaganza anticipated from this hugely talented group of musicians, the music of past and present has never sounded so innovative – or breathtaking. Get your guitars and string arrangements ready: Rocktopia begins previews at the Broadway Theatre on March 20 2018.

Special notice: Those with eclectic music tastes will love Rocktopia’s genre-defying mix of classic and contemporary.

Rocktopia seat view photos show what view you will get for your money. Unfortunately we do not have any seat views for this show.