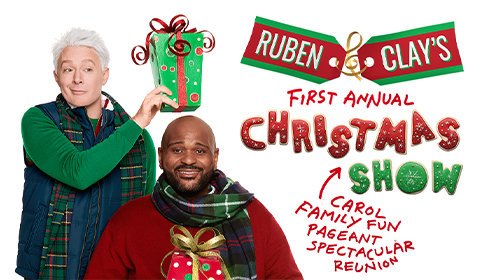 Imperial Theatre
0 seat views
Get excited for Christmas with Ruben & Clay as they bring all the fun of the season to Broadway. American Idol’s beloved odd couple will delight audiences with music and memories in Ruben & Clay's First Annual Christmas Carol Family Fun Pageant Spectacular Reunion Show at the Imperial Theatre.

After meeting, clashing and making up on American Idol Ruben Studdard and Clay Aiken have become something of a phenomenon. Now they bring their irresistible chemistry and charm to New York, where they’ll be serenading audiences with a medley of Christmas songs. Sprinkled amongst the festive crooning, expect some light-hearted comedy and entertainment - all backed by a fantastic live band – perfect for warming up on a December evening.

Ruben Studdard and Clay Aiken first came to prominence as the respective winner and runner-up of American Idol in 2003. Both have gone on to enjoy varied careers, with Studdard earning a Grammy Award nomination for “Superstar” and starring in a national tour of Ain’t Misbehavin’; and Aiken selling over 5 million albums, including his multi-platinum debut Measure of a Man.

Ruben & Clay’s Christmas Show on Broadway is directed by Jonathan Tessero (Home For the Holidays) with musical staging by Lisa Shriver, set design by Rob Bissinger (My Love Letter to Broadway) and costume design by James Brown III (Frozen; Harry Potter and the Cursed Child).

Special notice: Ruben & Clay on Broadway marks the first time the former rivals have performed together since 2003, so this is a must-see for anyone who couldn’t get enough of the pair on American Idol. It’s also got something for all ages, making it the perfect ticket for friends and family.

Ruben & Clay’s First Annual Christmas Carol Family Fun Pageant Spectacular Reunion Show seat view photos show what view you will get for your money. Unfortunately we do not have any seat views for this show.