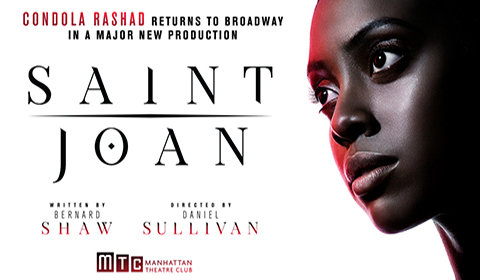 Saint Joan tells the story of Joan of Arc, a poor country girl in 15th-century France whose mysterious visions propel her into leading the French army to victory against the invading English troops. When the nation’s rulers become threatened by her popularity and influence, they unite to bring her down and she finds herself on trial for her life.

Condola Rashad stars as Joan. Condola began her career Off-Broadway at Manhattan Theatre Club and has since been nominated for three Tony awards, for her roles in Stick Fly, The Trip to Bountiful and A Doll’s House, Part 2, respectively. She currently stars in the popular TV series and Joshua Marston’s Netflix feature Come Sunday. She is joined in Saint Joan ny Walter Bobbie (Bright Star, Venus in Fur) as the Bishop of Beauvis/Cauchon, Adam Chanler-Berat (Amélie, Peter and the Starcatcher) as The Daupin/Charles VII, Jack Davenport (Smash, Pirate of the Caribbean) as the Earl of Warwick and John Glover (The Cherry Orchard, Waiting for Godot) as the Archbishop of Rheims.

Bernard Shaw is one of the world’s greatest and best-known playwrights, with major works including Pygmalion and Man and Superman. This production is directed by Daniel Sullivan (The Little Foxes, All’s Well That Ends Well), with scenic design by Scott Pask and original music by Bill Frisell.

A true historical legend, the story of Joan of Arc has endured for hundreds of years. Experience the story for yourself in Saint Joan at the Samuel J Friedman Theatre.

Special notice: Anyone interested in learning more about the true historical events surrounding one of the world’s most famous heroines should be sure to catch Saint Joan.

Saint Joan seat view photos show what view you will get for your money. Unfortunately we do not have any seat views for this show.