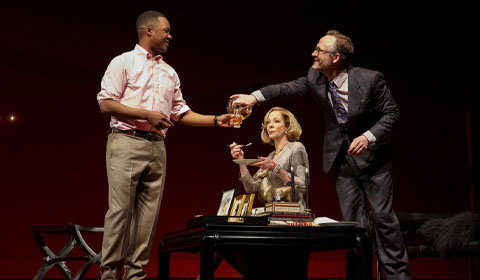 Barrymore Theatre
0 seat views
John Guare’s Six Degrees of Separation is set to enjoy a Broadway revival this year, as it opens at the Ethel Barrymore Theatre. The thrilling story of human deception and connection was nominated for the Pulitzer Prize and Tony Awards when it first premiered in 1990.

Ouisa and Flan Kittredge are a wealthy New York couple with a wide social circle. When Paul arrives at their door, injured and claiming to be a friend of their son’s, they take him in – but soon discover they’ve been taken for a ride themselves. As they piece together the identity and motives of a conman who claimed to be Sidney Poitier’s son, the Kittredges realize the young man has been pulling the same stunt with other couples in the city.

Playwright John Guare’s other works include The House of Blue Leaves, which won an Obie Award in 1971. He was elected into the American Theatre Hall of Fame in 1993.

Six Degrees of Separation on Broadway is directed by Trip Cullman (Significant Other) with scenic design by Tony and Drama Desk nominee Mark Wendland (Next to Normal; The Merchant of Venice) and costume design by Tony Award winner Clint Ramos (Sunday in the Park with George; Eclipsed).

With a famously quotable closing speech about the interconnected nature of humanity, Six Degrees of Separation is a thoughtful and resonant play that explores our fears and desires. It begins previews on April 5 2017 at the Ethel Barrymore Theatre.

Special notice: Fans of the 1993 movie adaptation should book tickets to watch Six Degrees of Separation on stage. With a stunning central performance expected from Allison Janney, this is also one to watch for future Tony Awards credit.

Six Degrees of Separation seat view photos show what view you will get for your money. Unfortunately we do not have any seat views for this show.