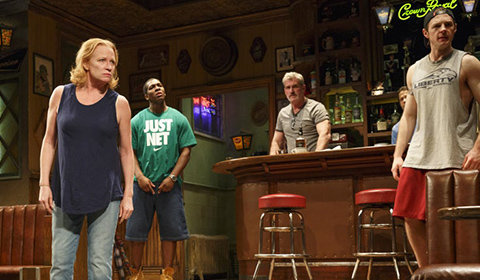 Studio 54 Theatre
0 seat views
Sweat tells a story that will be relatable by many, with characters that are instantly recognisable. Set predominantly in a dive bar in Reading, Pennsylvania, where the regular drinkers all work at the same steel tubing factory, Sweat mixes warm humour with tense conflict as it examines the pressures placed on the honest American labourer by the changing global economy in the early 21st century.

When it premiered at the Oregon Shakespeare Festival in 2015, Sweat became an instant critical darling. After a successful run at The Public Theatre, Sweat won writer Lynn Nottage (Intimate Apparel) the 2017 Pulitzer Prize for Drama. Sweat is now set for its Broadway debut at Studio 54.

The highly-skilled cast bring an earthy believability to the characters. Johanna Day (Proof) as Tracey gives a performance that is equal parts warmth, humour, anger and desperation. Michelle Wilson (A Raisin in the Sun) deftly displays the internal conflict of a woman caught in a crisis of conflict between friends and family as Cynthia. Central to the ensemble is barman Stan, played with strength and humanity by James Colby, star of many Tennessee Williams plays on the Hartford Stage in Connecticut, including A Streetcar Named Desire and Night of the Iguana).

Director Kate Whoriskey won the Drama Desk Award for Ruined and proves with Sweat that she knows how to draw audiences into the lives of the people on stage, making them feel the highs and the lows that these characters are going through.

Sweat is an emotional rollercoaster, showing believable characters at their best and their worst. This is relatable ‘slice-of-life’ drama that any lovers of great contemporary theatre won’t want to miss.

Special notice: Fans of earthy, true-to-life drama about real people will find everything to like in Sweat. Theatre-goers who enjoyed Lynn Nottage’s previous plays Intimate Apparel and Ruined are likely to find Sweat to be her most powerful work yet.

Sweat seat view photos show what view you will get for your money. Unfortunately we do not have any seat views for this show.