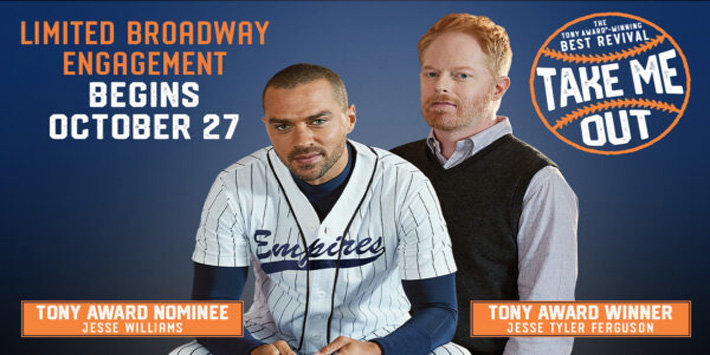 Take Me Out tickets

The ground-breaking play returns to Broadway

Grey’s Anatomy's Jesse Williams stars in hit play Take Me Out as it returns to Broadway this year.

When center fielder and star of the Empires baseball team, Darren Lemming, comes out, he is met with hostility from some teammates and fans and must face the challenges of being a gay person of color in a masculine, traditionally American sport. As the Empires struggle to reach a championship season, long-held prejudices about tradition, loyalties and winning are questioned on and off the field.

Richard Greenberg’s play is a budding modern classic, and enjoyed a highly praised season on Broadway in 2022 at the Hayes Theater. Its popularity means it now returns for a second, strictly limited season with Jesse Williams starring as Darren Lemming. Other Take Me Out Broadway casting includes Modern Family’s Jesse Tyler Ferguson, Bill Heck, Michael Oberholtzer and Julian Cihi.

Take Me Out on Broadway is directed by Tony Award nominee Scott Ellis Tootsie.

If you missed it the first time around, now’s your chance to book Take Me Out tickets and experience the ground-breaking play for yourself.

Take Me Out seat view photos show what view you will get for your money. Our users will start adding seat views when the show opens.