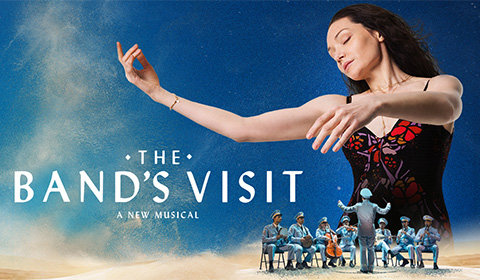 Barrymore Theatre
18 seat views
New musical The Band’s Visit has enraptured audiences with its fish-out-of-water tale of a group of musicians who stumble into a small Israeli town. After premiering at the Atlantic Theatre Company in 2016, it made its Broadway debut at the Barrymore Theatre in November 2017. It went on to win a staggering 10 Tony Awards including Best Musical in 2018, with critical acclaim across the board.

Based on the 2007 film of the same name, The Band’s Visit is a charmingly offbeat musical about a group of Egyptian musicians who mistakenly arrive in a little Israeli town on their way to a concert. As they get to know the local people, music punctuates the desert sky and these unexpected neighbors find that even brief meetings can have a lifelong impact.

The cast includes Katrina Lenk, who previously appeared in Indecent and Once on Broadway. She originated the role of Dina in The Band’s Visit's Off-Broadway premier. Israeli actor Sasson Gabay appeared in the original film, and makes his Broadway debut as part of the musical’s principal cast. Other cast members include Ari’el Stachel (The Golem of Havana) and Pomme Koch (Baghdaddy).

Featuring a sweeping, uplifting score from onstage musicians, The Band’s Visit at the Barrymore Theatre is a celebration of music’s power to bring us together.

Special notice: Fans of new musicals will definitely want to secure tickets for The Band’s Visit, which is unique amongst its Broadway peers. Anyone who enjoys international cinema will also love seeing this uplifting and compassionate story brought to life onstage.

The Band's Visit seat view photos show what view you will get for your money. Unfortunately we do not have any seat views for this show.