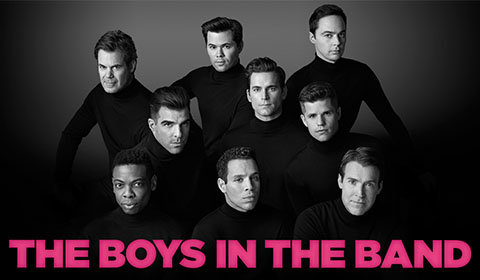 The Boys in the Band tickets

Booth Theatre
1 seat views
50 years after its Off-Broadway premiere, dark comedy The Boys in the Band takes a long-awaited trip to the Great White Way. This landmark play about a group of gay New Yorkers caused a sensation upon opening in 1968, and now heads to the Booth Theatre.

In the Upper East Side of Manhattan, a group of gay men arrive at their friend Harold’s apartment. It’s his birthday, and he’s anxious about getting older. As the drinks start flowing and the candles are blown out, an evening that’s meant to represent solidarity takes a sour turn, and the cracks between this group’s friendship slowly begin to expand.

The Boys in the Band is a momentous piece of theater in every sense of the word. Pre-dating many LGBT classics by a decade or more, it paved the way for frank and unapologetic representation of gay men on the stage.

A stellar cast has been assembled for The Boys in the Band’s Broadway debut, including Jim Parsons (An Act of God), Zachary Quinto (The Glass Menagerie), Matt Bomer (8) and Michael Benjamin Washington (Mamma Mia!).

With a compelling new cast hitting every blackly comic note of this groundbreaking play, The Boys in the Band at the Booth Theatre is a long-overdue addition to the Broadway playbill. It begins previews on April 30 2018, with opening night set for May 31.

Special notice: The starry cast of The Boys in the Band is enough to tempt many a theater fan into buying tickets. It’s also a must-see for anyone who wants to pay tribute to the rich history of LGBT voices on the stage.

The Boys in the Band seat view photos show what view you will get for your money. Unfortunately we do not have any seat views for this show.