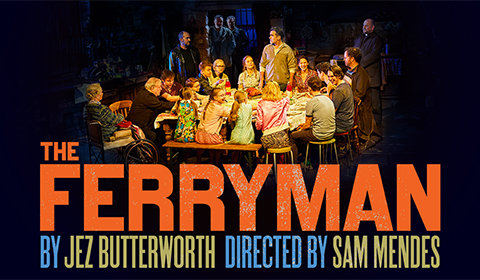 Set in Northern Ireland in 1981, The Ferryman tells the story of the Carney family as they busily prepare for the annual harvest on their farm. They’re looking forward to a day of hard work on the land followed by a traditional night of food and celebration. But this year, they will be interrupted by an unexpected visitor.

Jez Butterworth adds to his already impressive resume with The Ferryman. His previous work as a playwright includes Mojo (1996) and Jerusalem (2009), which won the Evening Standard Theatre Award for Best Play. His screenwriting credits include Spectre and Black Mass.

Director Sam Mendes is perhaps best known for his work on the Academy Award-winning American Beauty and James Bond films Skyfall and Spectre. As for the stage, he enjoyed a decade as Artistic Director at London’s Donmar Warehouse and has been named Best Director at the Olivier Awards for plays including Company (1995) and Uncle Vanya (2003).

The Ferryman’s New York cast includes three-time Tony Award nominee Brian d’Arcy James, whose credits include Next to Normal and Spotlight. He is joined by Holley Fain (Harvey) and Emily Bergl (Cat on a Hot Tin Roof, Plenty).

The Ferryman originally opened with a sold-out run at London’s Royal Court Theatre, and earned so much acclaim that it transferred onto the West End for an extended engagement. Thanks to its star pairing of Jez Butterworth and Sam Mendes, The Ferryman at the Bernard B. Jacobs Theatre is a must-see play.

Special notice: Fans of Jez Butterworth’s previous work will want to grab tickets for The Ferryman, which has already picked up critical acclaim and awards in the U.K. The enticing combination of Butterworth and Sam Mendes is an unmissable opportunity to experience two theater heavyweights at their best.

The Ferryman seat view photos show what view you will get for your money. Unfortunately we do not have any seat views for this show.