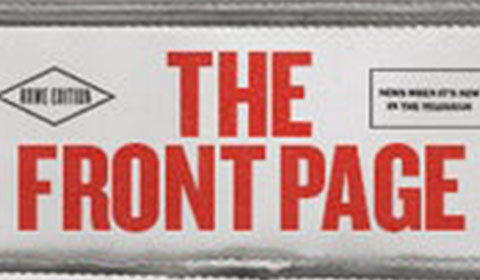 Broadhurst Theatre
0 seat views
Nathan Lane, John Slattery and John Goodman bring one of US drama’s best screwball comedies back to Broadway this year. Following an escaped convict and the ambitious reporter who harbors him, The Front Page opens at the Broadhurst Theatre.

In a dingy, airless press room at Chicago’s Criminal Courts Building, the city’s journalists are waiting for convicted murderer Earl Williams to be sentenced to death. But when news of his escape spreads, star reporter Hildy Johnson suddenly finds himself colluding with hard-nosed editor Walter Burns to shelter the biggest scoop of their careers from the rat pack around them.

The Front Page at the Broadhurst Theatre boasts an impressive cast, with Nathan Lane as Walter Burns, John Slattery as Hildy Johnson and John Goodman as Sheriff Hartman.

Lane is a seasoned Broadway performer, having won Tony Awards for A Funny Thing Happened on the Way to the Forum and The Producers. He last appeared on the Great White Way in It’s Only a Play at the Gerald Schoenfeld Theatre.

Slattery is best known for his Emmy Award nominated performance in AMC’s Mad Men, whilst John Goodman is a Golden Globe award winner for Roseanne and a regular collaborator of the Coen Brothers (The Big Lebowski; Oh Brother, Where Art Thou?).

With its quick-witted dialogue and madcap plot, The Front Page was deemed an instant hit at its 1928 premiere. Having already enjoyed three revivals, this whacky classic is sure to stop the presses when it runs at the Broadhurst Theatre from September 2016.

Special notice: The Front Page is perfect for any theater fans wanting to laugh out loud at an intelligent, witty and utterly zany gem of American writing. With masterclass performances from its three stars, this is a guaranteed winner on Broadway.

The Front Page seat view photos show what view you will get for your money. Unfortunately we do not have any seat views for this show.