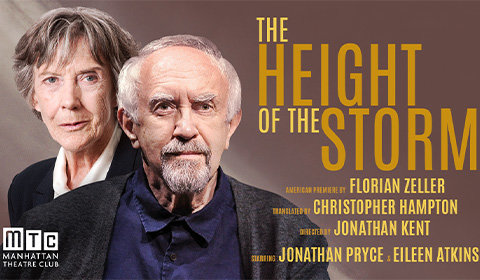 The Height of the Storm tickets

For the last 50 years, André and Madeleine have enjoyed the pleasures and unpredictable nature of marriage. But as they prepare for their daughters’ visit one weekend, troubling events threaten to call their lifelong bond into question. A bunch of flowers from an unknown source, and a woman claiming to know André; in The Height of the Storm the fallibility of love and the fragility of life are explored between one couple.

Jonathan Pryce stars as André. An internationally acclaimed actor, Pryce has appeared in global hits including Pirates of the Caribbean (2003) and Game of Thrones. A two-time Tony and Olivier Award winner, his stage credits include Miss Saigon (1990) and The Goat, or Who is Sylvia? (2004).

Dame Eileen Atkins joins Pryce as Madeleine. Her career spans stage and screen, with television credits including a BAFTA Award-winning performance in Cranford (2008). On stage, she is a three-time Olivier Award winner, most recently being named Best Actress for Honour (2004).

Florian Zeller is enjoying a year of success in London, with The Son transferring to the West End’s Duke of York’s Theatre in August. In his home country, he has won several Molière Awards for his plays.

Delivering an emotional gut punch from one of Europe’s most prolific young writers, The Height of the Storm at the Samuel J. Friedman Theatre begins previews on September 10 2019, with opening night on September 24.

Special notice: The Height of the Storm on Broadway is a fantastic opportunity to watch two acting veterans in a fresh young writer’s work. Anyone wanting to keep up with the future classics should also secure tickets for the play.

The Height of the Storm seat view photos show what view you will get for your money. Unfortunately we do not have any seat views for this show.