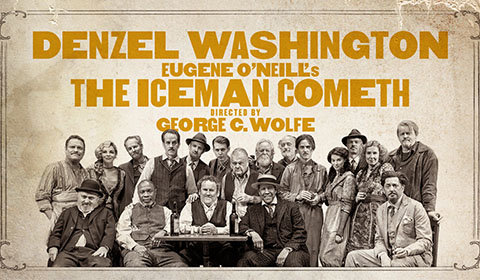 Bernard B. Jacobs Theatre
0 seat views
After scooping a Tony Award for his performance in Fences and directing the acclaimed film adaptation, Denzel Washington returns to Broadway for devastating Eugene O’Neill classic The Iceman Cometh.

In a rundown New York bar, a group of alcoholics clutch their beers and lament their long-lost ambitions. Usually chief among the drinkers is boisterous salesman Theodore “Hickey” Hickman, but today he’s changed. As he encourages his peers to put down their glasses and turn pipe dreams into reality, O’Neill’s play darkly explores self-deception, reinvention and the ever-elusive American Dream.

Denzel Washington is a true titan of both stage and screen, having won two Academy Awards (Training Day; Glory), three Golden Globes and a Tony. His previous Broadway appearances include Fences and A Raisin in the Sun.

He is now set to play Hickey in this revival of The Iceman Cometh, with further casting including Colm Meaney (Breaking the Code), David Morse (How I Learned to Drive) and Bill Irwin (Waiting for Godot).

The creative team on this new revival of The Iceman Cometh includes visionary Angels in America director George C. Wolfe, with set design from Tony Award winner Santo Loquasto (Hello, Dolly!) and costumes from Ann Roth (The Book of Mormon).

The Iceman Cometh at the Bernard B. Jacobs Theatre is a sublime meeting of one of the greatest contemporary actors with some of the most muscular, compelling American drama. Sure to be a knock-out theatrical event, the play begins previews on March 23 2018.

Special notice: Fans of classic American drama shouldn’t miss this opportunity to experience one of the true greats performed by an Academy Award winning actor. Those who missed out on Denzel Washington’s lauded turns in previous Broadway hits should also snap up tickets for The Iceman Cometh as soon as possible.

The Iceman Cometh seat view photos show what view you will get for your money. Unfortunately we do not have any seat views for this show.