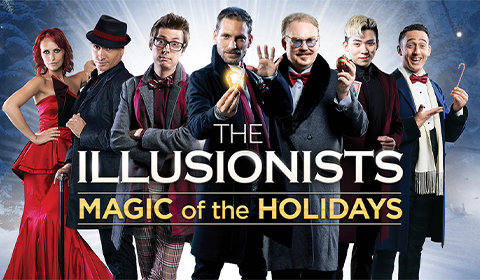 The Illusionists - Magic of the Holidays tickets

First opening in Australia, The Illusionists arrived in New York with Witness the Impossible in 2014. It has since racked up audiences and stellar reviews worldwide, from tours across the United States and Canada, to a season at London’s Shaftesbury Theatre. Not content with visiting 350 cities worldwide, the show has also conjured up appearances on America’s Got Talent and The Ellen DeGeneres Show.

In Magic of the Holidays at the Neil Simon Theatre, audiences can expect even more thrilling and outrageous displays of magic, technological wonders and mind-boggling escapes. With something for all ages and temperaments, acts include “The Mentalist” Christ Cox, “The Manipulator” Hyun Joon Kim and “The Transformationalists” SOS and Victoria Petroysan.

Dubbed “theatre’s Cirque du Soleil” by The Times in the UK, The Illusionists – Magic of the Holidays is directed by Neil Dorward, and produced by Simon Painter, Tim Lawson, MagicSpace Entertainment and The Works Entertainment.

Bringing a thrilling and utterly unique brand of festive spirit to the Great White Way, The Illusionists on Broadway are utterly unmissable. Prepare to be dazzled and delighted when the show spirits its way into the Neil Simon Theatre from November 29 2019.

Special notice: Anyone who enjoyed The Illusionists on Broadway in previous years should snap up tickets to this latest festive treat. With a fantastic variety of feats on show, it’s also perfect for groups with varied tastes.

The Illusionists - Magic of the Holidays seat view photos show what view you will get for your money. Unfortunately we do not have any seat views for this show.