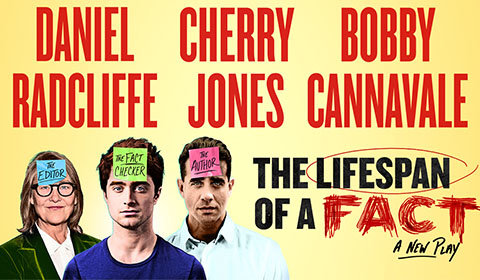 The Lifespan of a Fact tickets

Studio 54 Theatre
0 seat views
Fake news and editorial trickery take center stage this Fall as The Lifespan of a Fact opens at Studio 54 Theatre. Based on essayist John D’Agata and fact-checker Jim Fingal’s experimental book, this new play is based on the true story of D’Agata’s essay It Happens Here.

Jim is a tenacious young fact-checker. John is a nonconformist, difficult author. Emily is an editor with exacting standards and deadlines. In a high-pressure industry that trades on a precarious mix of fact and fiction, these three characters faces a battle of wills – and a battle of authenticity – as John’s exciting new work is readied for publication.

Daniel Radcliffe (Jim) has carved out an impressive post-Harry Potter theater career in the past decade. Now a semi-regular presence on Broadway, his stage credits include Equus and The Cripple of Inishmaan.

Cherry Jones (Emily) has enjoyed a long career in television, film and theater with highlights including originating Hannah Jelkes in The Night of the Iguana and winning the Tony, Drama Desk and Outer Critics Circle awards for Doubt in 2004.

Bobby Cannavale (John) made his Broadway debut in Mauritius (2007). He is widely known as Gyp Rossetti in Boardwalk Empire on HBO, a role which earned him his first Primetime Emmy Award.

The Lifespan of a Fact is adapted for the stage by Jeremy Karaken, David Murrell and Gordon Farrell. Director Leigh Silverman brings the show to Broadway, with previous credits including critically acclaimed musical Violet. Other creatives include set designer Mimi Lien (Natasha, Pierre and the Great Comet of 1812) and costume designer Linda Cho (Anastasia).

In an era of sensationalism and questionable truths, The Lifespan of a Fact at Studio 54 Theatre is an intelligent and timely offering. It opens on October 18 2019, with previews starting on September 20.

Special notice: Anyone who likes their theater to be contemporary and relevant should catch The Lifespan of a Fact, thanks to its searching yet entertaining exploration of the media machine.

The Lifespan of a Fact seat view photos show what view you will get for your money. Unfortunately we do not have any seat views for this show.