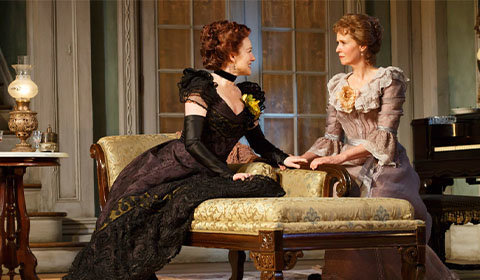 In Alabama at the turn of the 20th century, Regina Giddens, her brothers and her sister-in-law Birdie ruthlessly fight to outwit and outmanoeuvre each other’s business strategy. With shares of a lucrative cotton factory at stake, playwright Lillian Hellman’s sharply exposes the destructive allure of money and greed.

The Little Foxes premiered in 1939 and is considered an enduring example of 20th century American drama. It wasn’t a one-hit-wonder: Hellman’s other successes include The Children’s Hour and Watch on the Rhine.

Laura Linney and Cynthia Nixon co-star and alternate as Regina and Birdie. Emmy Award winner Linney is a Broadway veteran, having performed in critically acclaimed shows including The Crucible and Les Liaisons Dangereuses. Nixon is similarly prolific, with previous stage credits including Wit and a Tony Award winning turn in Rabbit Hole.

Written 80 years ago but remarkably resonant to modern America, The Little Foxes at the Samuel J. Friedman Theatre is a smart, insightful classic with two of our best stage actresses heading up the cast. It begins previews on March 29 2017.

Special notice: Any serious Broadway fans shouldn’t pass up an opportunity to see both Laura Linney and Cynthia Nixon stretch their acting muscles in two roles.

The Little Foxes seat view photos show what view you will get for your money. Unfortunately we do not have any seat views for this show.