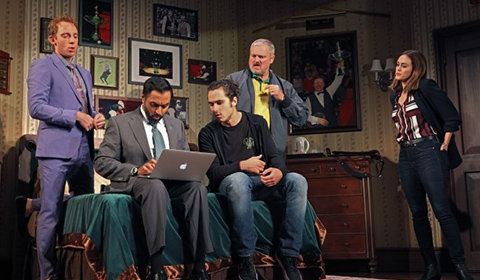 Samuel J. Friedman Theatre
0 seat views
Richard Bean, writer of the multiple award-winning One Man, Two Guvnors, brings another hilarious comedy to Broadway with The Nap, an outrageous, laugh-out-loud look at the world of seedier side of competitive snooker (the British version of pool). With a madcap cast of characters and a snooker tournament that unfolds live on stage – The Nap offers a raucous night of laughs at the Samuel J Friedman Theatre.

In this modern farce, Richard Bean once again proves his skill with writing rapid-fire jokes and crazy situations involving crazier characters. The Nap is a masterclass in comic timing, with each actor showing impeccable form. John Ellison (Tony Award nominee for The Full Monty) skilfully drops comic one-liners as the forgetful rogue Bobby, while Alexandra Billings (well-loved for her portrayal of Davina in Amazon Prime series Transparent) makes a fantastic Broadway debut as Waxy Bush, showing wonderful comic-menace as a philosophizing gangster who gets even simple words and concepts wrong.

Daniel Sullivan, who won the Tony Award for Proof directs with the precision and confidence necessary for a zany comedy with so many moving parts. The scenic design by Tony Award winner David Rockwell (She Loves Me) brings The Crucible (Sheffield’s premier snooker venue) to life.

The Nap is an uproarious comic thrill-ride with the pedigree of one of the most exciting playwrights to come out of Britain this century. This night of laughs at the Samuel J Friedman Theatre is not to be missed.

Special notice: Lovers of larger-than-life British TV comedies such as Are You Being Served? will find a lot to like in The Nap. Richard Bean won a lot of fans on Broadway for One Man, Two Guvnors, none of whom will want to miss his latest romp.

The Nap seat view photos show what view you will get for your money. Unfortunately we do not have any seat views for this show.