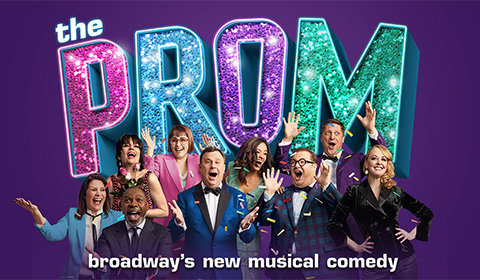 Longacre Theatre
64 seat views
Following a limited engagement at Atlanta’s Alliance Theatre, new musical The Prom opened in New York in 2018, and was immediately named a Critic’s Pick in The New York Times. From the creative minds behind Mean Girls, Disney’s Aladdin and Elf, this hilarious and joyful show about showbusiness getting up in other people’s business is playing at the Longacre Theatre.

Emma is a small-town teenager who just wants to take her girlfriend to the prom. But when the PTA protests and the dance is cancelled, her story goes viral on social media and catches the attention of a group of self-absorbed Broadway actors. Recently out of work, the troupe is desperate to take on a good cause to regain the spotlight... but after storming Emma's town in a truly dramatic fashion, they find themselves caught up in a fight for equality and love.

The Prom at the Longacre Theatre stars Caitlin Kinnunen as Emma, with previous credits including The Bridges of Madison County and Spring Awakening on Broadway. Her unlikely supporters are played by Tony Award nominee Brooks Ashmanskas (Something Rotten!), Beth Leavel, who won Tony and Drama Desk awards for The Drowsy Chaperone and Christopher Sieber, whose work includes Matilda and Shrek.

With a book by Tony Award-winner Bob Martin (The Drowsy Chaperone, Elf) and Chad Beguelin (Disney’s Aladdin), who also provides the show’s lyrics, The Prom features music by Matthew Sklar (Elf, The Wedding Singer) and is directed by Casey Nicholaw. The latter’s work as a director and choreographer can also be enjoyed in Mean Girls at the August Wilson Theatre.

Full of showstopping songs including “Dance with You” and “Love Thy Neighbor”, The Prom is a satirical but heart-warming story about Broadway stars bringing their own glamor to a small-town scandal. It is currently playing at the Longacre Theatre.

Special notice: Fans of Mean Girls the musical or The Book of Mormon will want to grab tickets for The Prom, which has a similar satirical tone and uplifting message.

The Prom seat view photos show what view you will get for your money. Unfortunately we do not have any seat views for this show.