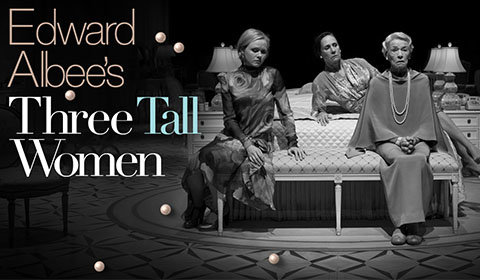 Inspired by playwright Albee’s adoptive mother, Three Tall Women’s titular characters are known only as A, B and C. With ages spanning from 20s to 90s, the trio open the show as an ailing elderly woman, a caregiver and a law associate. Over two acts, their thorny but insightful relationships transform into a profound reflection of a single woman’s choices and mistakes over 70 years.

Glenda Jackson (woman A) returned from time as a British Member of Parliament to play King Lear at London’s Old Vic Theatre in 2016. Not content with conquering Shakespeare’s towering work, she now heads to New York for the first time since 1988’s Macbeth.

An Academy Award winner for A Touch of Class and Women in Love, she is joined on stage by recent Tony Award winner Laurie Metcalf (A Doll’s House, Part 2) as woman B and Alison Pill (The Lieutenant of Inishmore; The Miracle Worker) as woman C.

Considered one of Edward Albee’s most personal plays, Three Tall Women at the Golden Theatre is an unmissable opportunity to watch some of theater’s most powerful talents delve into a Pulitzer Prize winning masterpiece of memory and human frailty. It begins previews on March 1 2018, with opening night scheduled for March 29.

Special notice: Three Tall Women is a must-see for those who fondly remember Glenda Jackson’s previous theater engagements – and equally so for those too young to have seen her before. Theatergoers can also count themselves as the first to catch Albee's great play on Broadway; prior to now, it has never been staged on the Great White Way.

Three Tall Women seat view photos show what view you will get for your money. Unfortunately we do not have any seat views for this show.