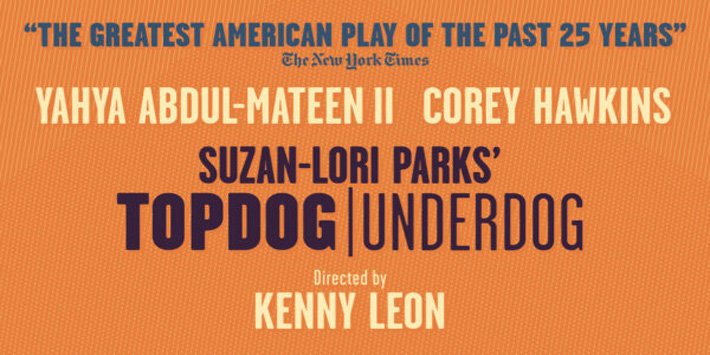 A Pulitzer-winning story of brotherhood

Pulitzer Prize-winning masterpiece Topdog/Underdog returns to Broadway on its 20th anniversary, with Tony Award nominee Corey Hawkins starring as one of two brothers coming to terms with their past.

This dark but humorous story follows brothers Lincoln and Booth - named as a joke by their father. The pair are linked not only by blood, but by an obsession with street con game “three-card monte”. As the game and their lives unfold, Booth and Lincoln must confront the ghosts and true nature of their pasts.

Still as powerful now as it was in the early 2000s, book Topdog/Underdog tickets for performances at the Golden Theatre.

Topdog/Underdog seat view photos show what view you will get for your money. Our users will start adding seat views when the show opens.

Earn double Rewards points by adding your Topdog/Underdog seat view photo! Use your points for Theatre Tokens and Encore Tickets vouchers and get money off your next theatre trip.