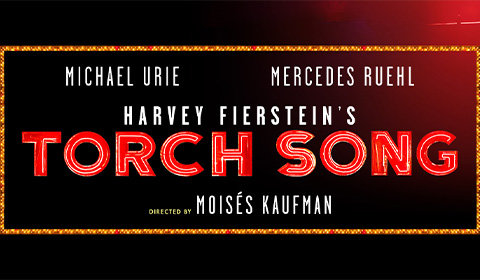 Hayes Theater
0 seat views
After a hilarious and rousing run Off-Broadway, Harvey Feirstein’s Torch Song is set to enjoy a limited Broadway engagement at the Hayes Theater. Following one man’s odyssey to find happiness and a family, the play is a classic of LGBT theater.

Formed of three Acts - International Stud, Fugue in a Nursery and Widows and Children First! - Torch Song follows gay man and drag queen Arnold as he navigates love and life in New York. From a rocky relationship with his lover to settling down and adopting a son – all by way of a disapproving mother - Arnold’s search for happiness and respect is heartfelt, funny and revolutionary.

Michael Urie stars as Arnold for Torch Song on Broadway. The recipient of a Clarence Derwent Award for Most Promising Male Newcomer, his previous credits include How To Succeed in Business Without Really Trying. He is joined by Tony Award winner Mercedes Ruehl (The Rose Tattoo; The Goat, Or Who Is Sylvia?), Ward Horton, Jack diFalco, Michael Hsu Rosen and Roxana Hope Radja.

Playwright Harvey Fierstein is celebrated for both his writing and acting, having penned the books for Kinky Boots and Newsies and originated classic roles including Edna Turnblad in Hairspray. He is a four-time Tony Award winner.

At the Hayes Theater, Torch Song is directed by Tony Award nominee Moisés Kaufman (I Am My Own Wife) with scenic design by David Zinn (The Boys in the Band), costumes by Clint Ramos (Once On This Island) and lighting by John Narun (The Elephant Man).

With a beautifully bittersweet story at its heart and the soulful sound of torch songs weaving throughout, Torch Song at the Hayes Theater is a stunning celebration of self-respect and self-love. It begins previews on October 9 2018, with opening night set for November 1.

Torch Song seat view photos show what view you will get for your money. Unfortunately we do not have any seat views for this show.